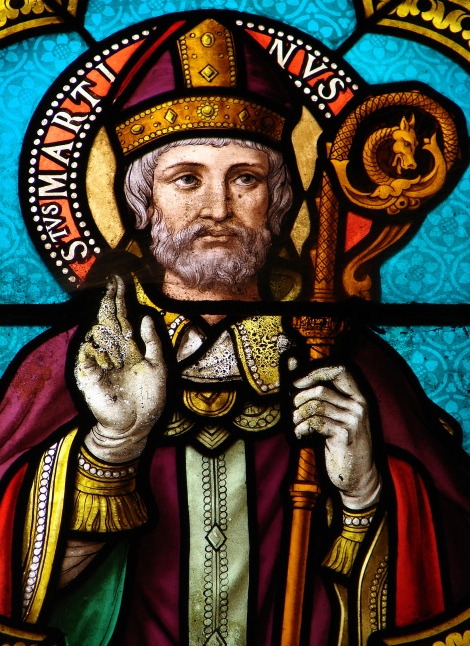 While the concourse of pilgrims to the sepulchre of the Bishop of Tours induced his third successor Perpetuus to raise over his precious remains the basilicas, in which so many prodigies were to be wrought all through the middle ages, Rome herself was dedicating to St. Martin one of her noblest churches, uniting with him as joint titular her own illustrious Pontiff and Confessor Sylvester. Adorned with this twofold glory, St. Martin-on-the-hill worthily inaugurated in the eternal City the cultus of Confessors side by side with that of the Martyrs. But another honor awaited the venerable sanctuary. Beside the wonder-working apostle and the pontiff of peace, both vanquishers of idolatry, who had escaped the sword only through the conversion of the persecutors, the last of the martyr-popes, also Martin by name, came to seek a resting place, long after the pagan persecutions had ceased. “Martin I,” says Baronius, “fared better than any of his predecessors since the time of Constantine. Found worthy to suffer more than all of them for the Name of Jesus Christ, he had the good fortune to find a Decius and a Diocletian in a baptized prince.” (Baron, ad Ann 651)

The emperor thus stigmatized by the great annalist was Constans II. From his grandfather Heraclius, who at least had given the world a few years of glory, he inherited nothing but the Byzantine pretension of imposing his dogmatic edicts upon the Church. Like the Ecthesis of Heraclius, the Type of Constans aimed at silencing the Catholics in their struggle with the Monothelites. St. Leo II, on the 28th of June, has already initiated us into these contests concerning the integrity of the two natures, divine and human, in the Man-God. Could the Church, without protesting, allow it to be said that her Spouse had taken from Adam a mere appearance of humanity, a half-formed nature without a will, such as the new sectaries imagined?

More clear-sighted than Honorius, Martin I understood the danger, and knew how to repair the past while securing the future. Scarcely had he ascended the apostolic throne when he gathered, in the Church of our Savior, one of the most beautiful assemblies ever held there. “Sound the trumpet, cry out upon the mountain; soldiers of God, awake!” (Conclusion of the Opening Discourse) Thus from its very opening did the Lateran Council of 649 repair the fatal silence and avenge the Church’s honor. On reading its splendid and ample definitions, which present to the world the Son of the Virgin Mother in all his adorable integrity, we are reminded of the solemn declaration in the pretorium on the great Friday: “Behold the Man!” only that this time it was proclaimed in triumph and by those who loved him. Truly, O God our Savior, thou art the most complete, the most perfect, the most beautiful of the sons of men.

What a solace to the mind, to see the imperial lucubrations returned, with the qualification of wicked and impious (Impissimam ecthesim, scelerosum typum, Canon XVIII), to the Byzantine Caesar, who held the defenseless Pontiff at his mercy in still dependent Rome! Martin I, like St. Paul, could take the Church of God to witness (Epist. Encyclia promulgationis concili, 1178) that he had not neglected his duty of enlightening the flock; he could remind the pastors of the price at which Christ had purchased the sheep committed to their care: he himself was ready for everything. His martyrdom was to secure the final triumph, of which the sixth general Council and St. Leo II were destined to gather the fruits.

The Greeks celebrate on the 13th of April the feast of this glorious Pope, whom they call a “corypheus of divine dogmas, the honor of Peter’s See, the pontiff who maintained the Church unshaken on the divine Rock.” (Manaea. 13 Aprilla)

Rome gives the following brief notice of him in her Liturgy.

Martin was born at Todi in Umbria. Upon ascending the pontifical throne, he strove by letters and embassies to recall Paul, Patriarch of Constantinople from his wicked heresy to the true Catholic faith. But, supported by the heretical emperor Constans, Paul was so carried away as to exile the legates of the Apostolic See to various islands. The Pope, indignant at this outrage, summoned a council of one hundred and five bishops at Rome, in which he condemned Paul.

Upon this Constans sent the exarch Olympius into Italy, with orders either to kill Pope Martin or else to bring him to the emperor. Olympius, on reaching Rome, charged a lictor to assassinate the Pope as he was celebrating Mass in St. Mary’s at the Crib. But the man, attempting to do so, was suddenly struck blind.

From that time many calamities befell the emperor Constans, which however made him no better; and he sent Theodore Calliopus to Rome to seize the Pope. By his deceitful dealing Martin was arrested and led prisoner to Constantinople. Thence he was banished into the Chersonesus; where, on the eve of the Ides of November, he died worn out by his sufferings for the Catholic faith, and not without the glory of miracles. His body was afterwards translated to Rome, and placed in the church dedicated to Saints Sylvester and Martin. He governed the church six years, one month, and twenty-six days. He held two ordinations in the month of December, and ordained eleven priests, five deacons, and thirty-three bishops for diverse places.

If it is just that the human race should honor its members in proportion as it has been honored by them, thou, O holy Pontiff, deservest a glorious memory. For not only were thy wonderful virtues such as cause the very powers of heaven to admire our earth, but thou didst likewise compel Satan to humble himself before our human nature. Deified entirely in the Person of God the Son, it is through thee that it was fully recognized as such, in spite of contradictions, in spite of the powerful ones of this world leaguing with the spirits of wickedness to overcloud this incomparable nobility of the sons of Adam.

How comes it that man is ever ready to join hands with Satan for his own destruction? But Lucifer himself was at first his own only enemy; and surely his folly is more difficult to explain than that of the frail creature he strives to draw after him along the path of pride, which led him to perdition. It is pride that made him the prince of folly and the father of lies. His intellect, through the loftiest in heaven, was not proof against self-love, which induced him to take complacency in his created nothingness, to detain the truth of God in injustice, (Romans 1:18) and to prefer darkness to the light. Thus it is that man, following Satan’s example and dishonoring God to exalt themselves, become vain in their thoughts, (Romans 1:21) till such a darkness comes over their mind and heart and senses, as strikes with astonishment the soul that remains simple and upright in its humility.

Protect us then, O holy Pontiff! keep up in us the understanding of God’s gift. May we never deserve the reproach of the Psalmist: Man when he was in honor, did not understand; he is compared to senseless beasts, and is become like to them. (Psalms 48:13) May eternal Wisdom, to whose alliance we are called, never have the grief of seeing us prefer death. At the same time, teach us that, for the honor of God, as well as of man, the integrity of Our Lord’s Incarnation does not require the authentication of politicians, nor the approbation of the would-be wise; for it is of this mystery the Apostle says that we must believe it with the heart in order to become just, and confess it with the mouth in order to be saved. (Romans 10:10) Spare the Church the sorrow of ever again finding herself in such a situation as that from which thy heroic martyrdom was alone able to deliver her. 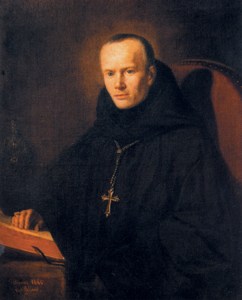