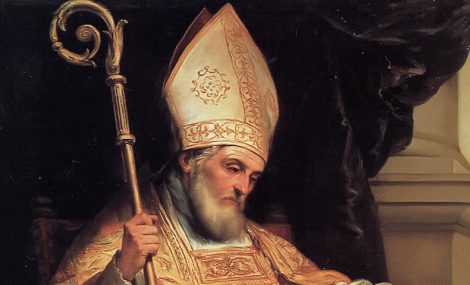 The Church presents to us, today, for our devout admiration, the memory of one of the holiest of her bishops — Isidore, the Bishop of Seville, the most learned man of his age, and, what is a still greater praise, the most zealous patriot and friend of his noble country. Let us study his virtues and confide in his patronage: both will help us to fervor during this holy Season.

Among Christian lands, there is one that has gained for herself the glorious name of the Catholic Kingdom. Towards the close of the 7th century, Divine Providence subjected her to a most severe trial by permitting the Saracen hordes to invade her: so that her heroic children had to struggle for 800 years for the recovery of their country. Cotemporaneously with Spain, Asia, also, and Africa fell under the Mussulman (Muslim) yoke, and have continued in their slavery up to the present day. Whence comes it, that Spain has triumphed over her oppressors, and that tyranny has never been able to make her children degenerate? The answer is easily given: Spain, at the period of her invasion, was Catholic, and Catholicity was the very spirit of the land: whereas those other nations, that yielded themselves slaves to the Saracens, were already separated from the Christian Church by heresy or schism. God abandoned them, because they had rejected both the truth of Faith, and unity with the Church; they fell an easy prey to the infidel conqueror.

Nevertheless, Spain had incurred an immense risk. The race of the Goths, by their long invasion of her territory, had sowed the seeds of heresy: Arianism had set up its sacrilegious altars in Iberia. But God did not permit this privileged country to be long under the yoke of error. Before the Saracens came upon her, she had been reconciled to the Church; and God had chosen one family to be the glorious instrument in the completion of this great work. Even to this day, the traveler through Andalusia will find the squares of its cities adorned with four statues: they are those of three brothers and a sister: St. Leander, Bishop of Seville; St. Isidore, whose feast we are keeping today; St. Fulgentius, Bishop of Carthagena; and their sister, St. Florentina, a Nun. It was by the zeal and eloquence of St. Leander that King Reccared and his Goths were converted from Arianism to the Catholic Faith, in the year 589; the learning and piety of our glorious Isidore consolidated the great work; Fulgentius gave it stability by his virtues and erudition; and Florentina co-operated in it by her life of sacrifice and prayer.

Let us unite with the Catholic Kingdom in honoring this family of Saints; and today, in a special manner, let us pay the tribute of our devotion to St. Isidore. The holy Liturgy thus speaks of him:

Isidore, by birth, a Spaniard, was an illustrious Doctor of the Church. He was born at Carthagena, and his father, whose name was Severianus, was governor of that part of the country. He was solidly trained to piety and learning by his two brothers, Leander, Bishop of Seville, and Fulgentius, Bishop of Carthagena. He was taught Latin, Greek, and Hebrew; he was put through a course of canon and civil law; and there was no science or virtue in which he did not excel. Whilst yet a youth, be so courageously combated the Arian heresy, which had long before infested the Goths, who had entered Spain, that he with difficulty escaped being put to death by the heretics. After the death of Leander, he was, in spite of himself, raised to the episcopal See of Seville, by the influence of king Reccared, and with unanimous consent of both clergy and people. His election was not only confirmed by Apostolic authority, but St. Gregory the Great, when sending him, as usual, the Pallium, is said to have appointed him bis own vicar, and that of the Apostolic See throughout all Spain.

It would be impossible to describe the virtues of Isidore as Bishop: how firm, humble, patient, and merciful; how zealously he labored for the restoration of Christian morals and ecclesiastical discipline, and how untiring be was in his efforts, both by word and writing, to establish them among his people; and, finally, how he excelled in every virtue. He was a fervent promoter of the Monastic Life in Spain, and built several Monasteries. He also built Colleges, in which he himself applied himself to the teaching the sacred sciences to the many disciples that flocked to him; among whom may be mentioned those two glorious Pontiffs, Ildephonsus, Bishop of Toledo, and Braulio, Bishop of Saragossa. In a Council held at Seville, he spoke with such power and eloquence, that he may be said to have destroyed the heresy of the Acephali, who were threatening to destroy the true faith in Spain. So great, indeed, was the universal reputation he had gained for piety and learning, that he had scarcely been dead sixteen years, when, in a Council held at Toledo, and at which fifty-two Bishops were present, St. Ildephonsus himself among them, he was called the Illustrious Doctor, the new Glory of the Catholic Church, the most learned man who had been seen in those ages, and one whose name should never be mentioned but with great respect. St. Braulio not only compared him to St. Gregory the Great, but said that he looked on him as having been sent by heaven, as a second St. James the Apostle, to instruct the people of Spain.

Isidore wrote a book On Etymologies, and another On Ecclesiastical Offices, and several others, of such importance to Christian and ecclesiastical discipline, that Pope St. Leo IV hesitated not to say, in a letter addressed to the Bishops of Britain, that one ought to adhere to the words of Isidore with that same respect as is shown to those of Jerome and Augustine, as often as a difficult case should arise, which could not be settled by Canon Law. Several sentences of his works have been inserted into the body of the Canon Law. He presided over the Fourth Council of Toledo, which is the most celebrated of all those that have been held in Spain. At length, after having driven the Arian heresy out of Spain, he publicly foretold the day of his death, and the devastation of the country by the Saracens; and having governed his See for about forty years, he died at Seville, in the year 636. His body was first buried, as himself had requested, between those of his brother and sister, Leander and Florentina. Afterwards, Ferdinand the 1st, King of Castille and Leon, purchased it, for a large sum of money, from Enetus, the Saracen governor of Seville, and had it translated to Leon. Here, a Church was built in his honour, and the miracles that are wrought by his intercession, have led the people to honour him with great devotion.

Faithful Pastor! the Christian people honour thy virtues and thy services; they rejoice in the recompense wherewith God has crowned thy merits ; hear the prayers that are offered to thee during these the days of salvation. When on earth, thy vigilance over the flock entrusted to thy care was untiring consider us as a part of it, and defend us from the ravenous wolves that cease not to seek our destruction. May thy prayers obtain for us that fullness of graces needed for our worthily completing the holy Season, which is so near its close. Keep up our courage; incite us to fervor; prepare us for the great Mysteries we are about to celebrate. We have bewailed our sins, and, though feebly, we have done penance for them; the work of our conversion has, therefore, made progress; and, now, we must perfect it by the contemplation of the Passion and death of our Redeemer. Assist us, O thou His faithful and loving Servant! Do thou, whose life was ever pure, take Sinners under thy care, and hear the prayers offered to thee on this day by the Church. Look down from heaven on thy beloved Spain, which honors thee with such earnest devotion. Revive her ancient ardor of Faith; restore to her the vigor of Christian morality; remove from her the tares that have sprung up among the good seed. The whole Church reveres thy noble Country for her staunch adhesion to the truths of faith; — pray for her, that she may come unhurt from the ordeal she is now being put through, and ever prove herself worthy of that glorious title of The Catholic Kingdom, which thou didst help her to gain.